A REHEARSED READING – WITH MUSIC BE THERE! 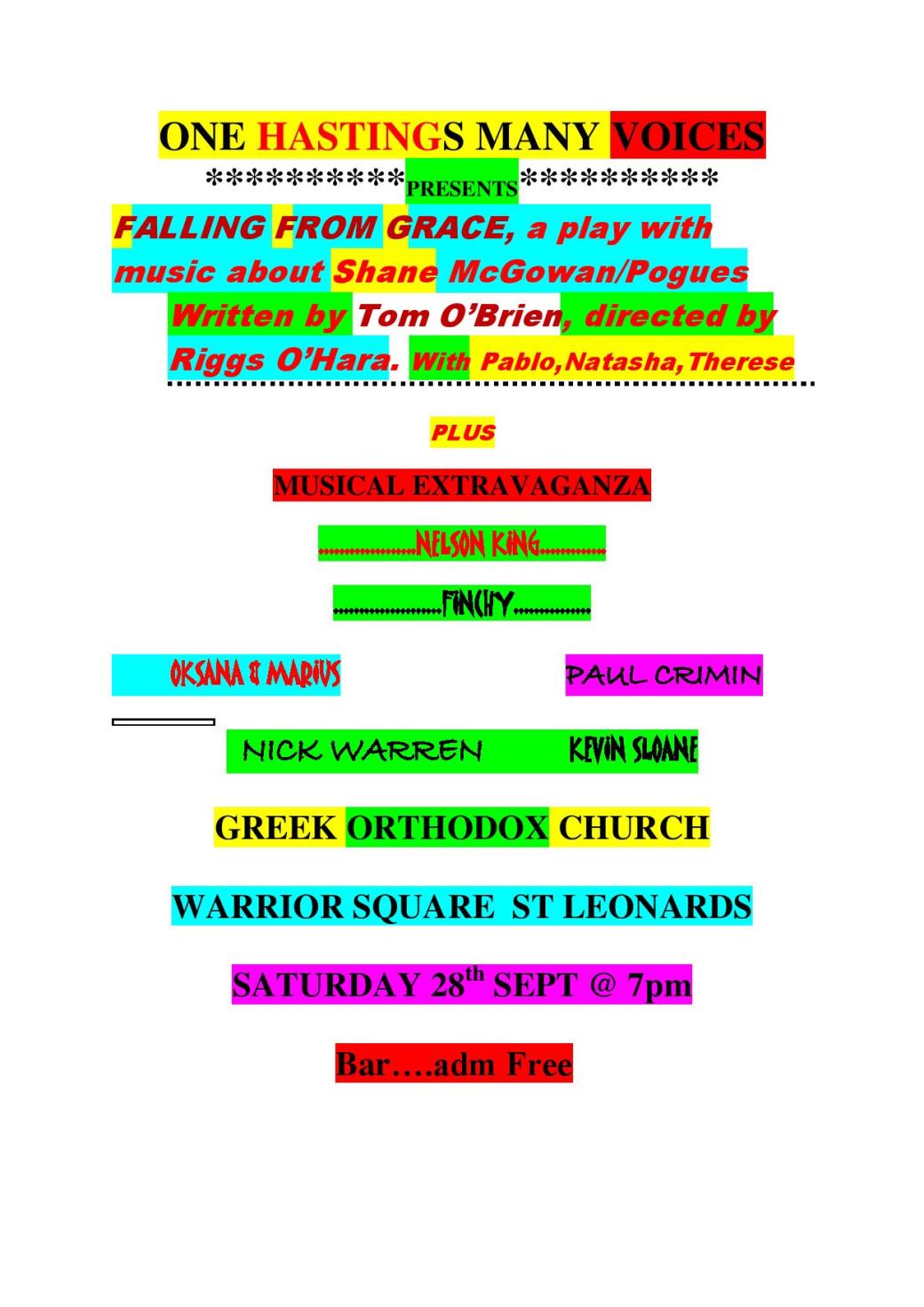 A new play by

Enter   SHANE MacGOWAN singing IF I SHOULD FALL FROM GRACE WITH GOD.

SHANE:           Good evening ladies and gentlemen! I am sorry to announce that due to

Too much….(indicates drinking with his hand)   Oh yes.

But these days you never can  tell, can ya? Maybe I’m a hologram

SHANE;         He’s fucken dead. Ya can’t slander the dead, can you?  Anyway, I come to praise Caesar not bury him. He was one of the greatest Irish writers of my time. Or any time. Greater than Joyce or O’Casey anyway.

Well, maybe not Joyce. Joyce was a bloody genius, he invented a whole new language. Brendan stole a few lines from both of them here and there.  But where’s the harm in that? I did the same meself.  Kcch…kcch…kcch.   Did you hear about the time he arrived in Montreal and some reporter asked him what he was doing in Canada. ‘Well’, he said, ‘I kept reading all these ads saying drink Canada dry, so I thought I’d give it a try’. (laughs)                            Maybe I’m him. His reincarnation, like. We, the Pogues I mean, got our dress style from Brendan. Did ya notice the similarity?

And the mice were squealing in my prison cell

All along the banks of the Royal Canal.

She settles herself on a stool, slightly apart from Shane. During the action they sometimes interact with each other, other times they appear separate from each other, though they are aware of each other at all times.

VICT:             I was living in an Irish-speaking hell hole in West Cork when I first heard tell of Shane. He was a nobody when I met him

VICT              I was desperate to be a Punk myself, but living where I did I had to make do with a black bin liner and fishnet tights. In my local pub I became friendly with Spider Stacey, who played the tin whistle and sang a bit. One night he had Shane with him. He was very aggressive.

SHANE:         You should feel honoured. You were in the presence of greatness. The fledgling Pogues.  Kcch…kcch…kcch.  Anyway, I was fucken drunk, not aggressive…

VICT:             You can fuck off for yourself, Shane O’Hooligan- or whatever you call yourself these days. (smiles sweetly) And that was how we met.

Vicoria, you left me in opium euphoria
With a fat monk singing Gloria
My girl with green eyes

SHANE:         I remember that!  You were trying to tell me I knew fuck all about Sean Nos singing.  Just because you came from the back of beyond in pre-historic West Cork and I was a sophisticate from London…

SHANE:         They know about Sean Nos singing. And dancing. And playing music. All my people were musicians and singers. It was open house there every night.. Anyway, I come from Kent, not Puckaun. Tunbridge Wells. I was born there, like, but I’d never admit coming from there. I was born on Christmas day. Did ya know that?

VICT:             And then you kissed me goodnight. And I fell in love. (smiles sweetly) I moved in with you and your flat was disgusting. One room, red walls, black carpet and a mattress on the floor. Overflowing ashtrays and bottles everywhere.

SHANE          You had five tellys – and none of them worked properly. Oh, and that crappy record player. What was that song you used to play all time? Van Morrison.  (she hums it)

VICT:             You played it right through the night once. I’d rather take a cheese-grater to my forehead for six hours now than do that again.

SHANE:         He’s a poet. Like Dylan and Springsteen. You gotta listen to the words. The words are everything. (pause) Nice bloke, Van

2 thoughts on “FALLING FROM GRACE”