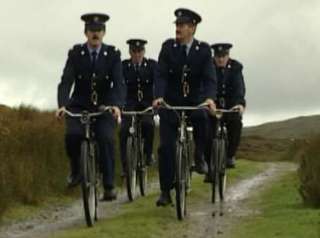 I was weaned on country music, Elvis and large dollops of raw West-of-Ireland poteen. The indiscriminate lighting of matches in the vicinity of Hickeystown could have had a disastrous effect on the population had anybody but known it. Fortunately, no one gave it a second thought.

Poteen is the elixir that drives men mad and makes greyhounds run faster. It is also useful for easing rheumy joints in cattle, horses and other beasts of burden. Its madness- inducing properties were confirmed many years ago when my grandfather had a vision. In the vision he saw gold; large quantities of it, on top of Tory hill, an ugly limestone carbuncle that did its best to hide Hickeystown from the rest of civilization.

Two days of feverish digging – aided and abetted by most of the able-bodied men in the village – produced nothing except two rusty bicycle wheels, a dead sheep and a dozen bottles of poteen. Long afterwards it emerged that the poteen was grandfather’s. He had forgotten where he had buried it and dreamed up the scheme in an effort to locate it.

However, by that time the harm was done; madmen and poteen were synonymous.

That it made greyhounds run faster was undoubtedly true. I witnessed it many times with my own eyes. My uncle Jack kept a couple of them for a pastime, and when he wanted them to run faster at the flapping tracks he frequented, he always laced their water with a drop beforehand. This worked well for a long time before someone figured out his secret. In the end every dog was running so fast that- as he himself put it – they were meeting themselves coming back before they got there. He settled for a couple of Jack Russells after that.

Being illegal, it fell to the Gardai to discourage its manufacture. They knew who was making it of course – indeed they were occasional customers themselves – and periodically they would make a sweep of the outlying areas. When you saw them heading for the hills, wellies slung over their shoulders, an axe in their hands, you knew the hunt was on. This mode of dressing was particularly noticeable in the weeks leading up to Christmas.

Uncle Jack and my father chopped down trees for a living, and if they supplemented their wages with the manufacture of a little ‘moonshine’, sure what was the harm? Like all good traditions it had been handed down through the generations; making it was just as natural as going to Mass on Sunday. The back of Tory hill was the ideal location for their activities; a forestry plantation, remote, and with plenty of spring water gurgling its way downwards from a spring on the top.

Many’s the day I spent there, reducing the trees to manageable sizes with the aid of a chainsaw, hauling the logs down to the roadside with the aid of a horse. Here, they were removed to the nearby chipboard factory by more horse-power – a lorry mounted with a hydraulic grab. In time I learned how to operate the grab – and how to make poteen.

I am not going to reveal how it is made – some rituals are sacred – suffice to say that it involves the use of a propane burner, a worm (a copper tube coiled in a certain way), running water, and , of course, the ingredients. When the concoction is bubbling merrily it has to be watched and nurtured, and regularly monitored as to the timing and the proportions of the ingredients added. (Uncle Jack once got his calculations wrong and several bottles concealed in the saddlebag on his bicycle exploded as he was passing the Garda station. Luckily it was closed at the time).

However, finding spots inaccessible to the Gardai became more difficult as time went by.  There were only a finite number of places that could be utilized, and they would eventually run out. The use of decoy stills was successful for a while, but as well as the extra costs involved it was a time-consuming diversion. Eventually the day arrived when the Gardai marched past the decoys. The days of poteen-making on Tory hill were over.

Which brings me to the music. (ah, I hear you say, I wondered when he’d get round to the music). Country music, rock-n-roll and poteen, a potent mix when ‘played’ by dad and uncle Jack in their band ‘The Moonshiners’.

The band, too, was a tradition. The brainchild of my grandfather, it originally comprised of a fiddler, an accordionist and a bodhran player, and was guaranteed to liven up wakes, weddings and other social diversions.

It still did that, but had added a guitarist and drummer to its ranks, and had become electric instead of acoustic. This new ensemble needed a place to practice, and when the parish priest offered them the now-defunct Temperance Hall they were delighted. Afterwards they discovered that it wasn’t entirely generosity that had prompted the offer; the church was the only building in the village with walls thick enough to keep out the sound, and practice

night saw a big attendance at evening devotions. The hall was also only four doors away from the Garda station and that, too, tended to close early on rehearsal nights.

It was the discovery of an underground stream beneath the cellars of the hall that gave uncle Jack the idea. Now that Tory hill was redundant a new venue was needed for making the poteen – and where better than right under the noses of the Gardai? They could search the countryside high and low and they would find nothing. They did too, but for the next five years all their efforts were in vain.

Practice nights were still rigidly adhered to, but now the music that blared from behind the locked doors was usually pre-recorded, while my father and uncle were busy in the cellars. Their activities would probably still be undiscovered to this day if it wasn’t for the fire. The cause of the fire is still a mystery; a foraging wild animal knocking over the burner perhaps?  but it gutted the hall, destroying everything inside. What hadn’t burnt melted in the intense heat generated by the potent mixtures in the cellar. A heady alcoholic cloud hung over the village for the best part of a day, leaving nobody in any doubt as to what had been going on.

The Garda Sergeant took it in good spirit (I know, a pun) considering everything, but there wasn’t much else he could do when all the evidence had been destroyed. Still, nobody was surprised when he was moved to a new post shortly afterwards.

Father and Uncle Jack decided to quit while they were ahead, and they put what money they had saved into a fish farm. They are cleaning up these days selling fresh mussels to the best restaurants in Dublin and Cork.

And me? These days I front the band. We are still called ‘The Moonshiners’, though I guess our brand of heavy rock would have grandfather rolling in his grave if he could hear us. Still, it’s a living.

And I still make the poteen. Oh, not the illegal sort, but a carefully blended, beautifully bottled concoction that is made under license in the now re-built Temperance Hall.

The next time you stop off at Shannon Airport pop into the duty-free and buy a bottle.

It is called Uisce Beatha – Water Of Life.