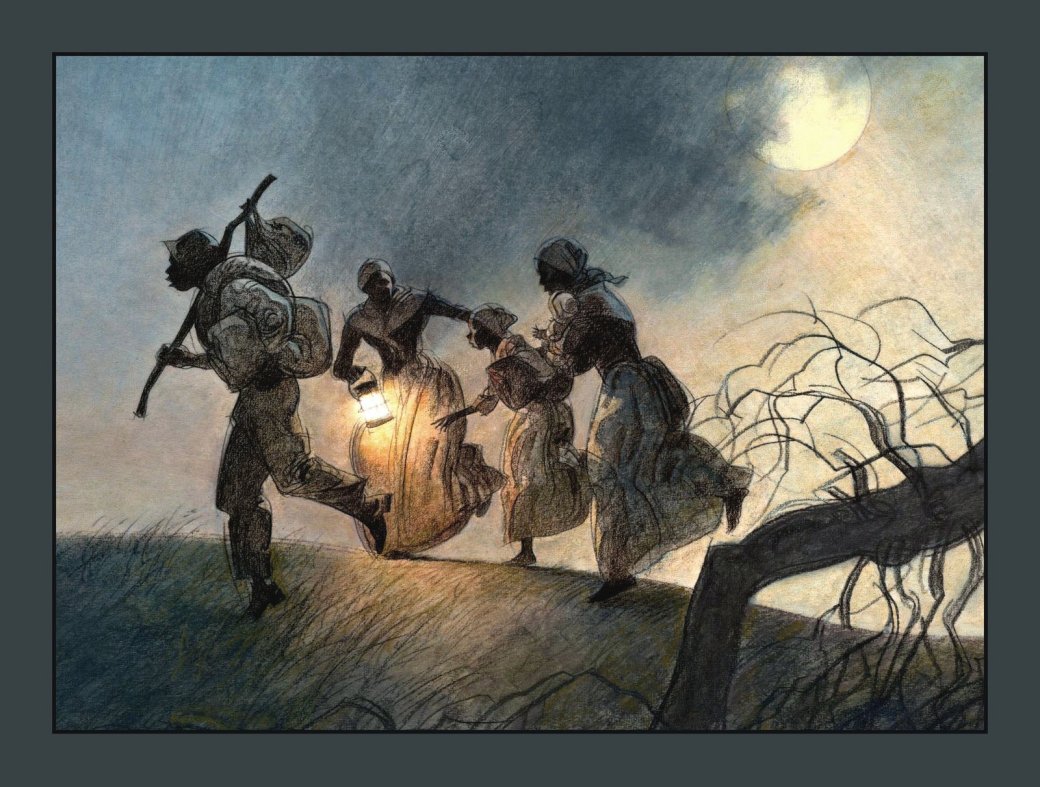 BY ROBERT HAYDEN
I.
Runs falls rises stumbles on from darkness into darkness
and the darkness thicketed with shapes of terror
and the hunters pursuing and the hounds pursuing
and the night cold and the night long and the river
to cross and the jack-muh-lanterns beckoning beckoning
and blackness ahead and when shall I reach that somewhere
morning and keep on going and never turn back and keep on going
Runagate
Runagate
Runagate
Many thousands rise and go
many thousands crossing over
O mythic North
O star-shaped yonder Bible city
Some go weeping and some rejoicing
some in coffins and some in carriages
some in silks and some in shackles
Rise and go or fare you well
No more auction block for me
no more driver’s lash for me
If you see my Pompey, 30 yrs of age,
new breeches, plain stockings, negro shoes;
if you see my Anna, likely young mulatto
branded E on the right cheek, R on the left,
catch them if you can and notify subscriber.
Catch them if you can, but it won’t be easy.
They’ll dart underground when you try to catch them,
plunge into quicksand, whirlpools, mazes,
turn into scorpions when you try to catch them.
And before I’ll be a slave
I’ll be buried in my grave
North star and bonanza gold
I’m bound for the freedom, freedom-bound
and oh Susyanna don’t you cry for me
Runagate
Runagate
II.
Rises from their anguish and their power,
Harriet Tubman,
woman of earth, whipscarred,
a summoining, a shining
Mean to be free
And this was the way of it, brethren brethren,
way we journeyed from Can’t to Can.
Moon so bright and no place to hide,
the cry up and the patterollers riding,
hound dogs belling in bladed air.
And fear starts a-murbling, Never make it,
we’ll never make it. Hush that now,
and she’s turned upon us, levelled pistol
glinting in the moonlight:
Dead folks can’t jaybird-talk, she says;
you keep on going now or die, she says.
Wanted     Harriet Tubman     alias The General
alias Moses     Stealer of Slaves
In league with Garrison     Alcott     Emerson
Garrett     Douglas     Thoreau     John Brown
Armed and known to be Dangerous
Wanted     Reward     Dead or Alive
Tell me, Ezekiel, oh tell me do you see
mailed Jehovah coming to deliver me?
Hoot-owl calling in the ghosted air,
five times calling to the hants in the air.
Shadow of a face in the scary leaves,
shadow of a voice in the talking leaves:
Come ride-a my train
Oh that train, ghost-story train

over trestles of dew, through caves of the wish,

Come ride-a my train
Mean mean mean to be free.