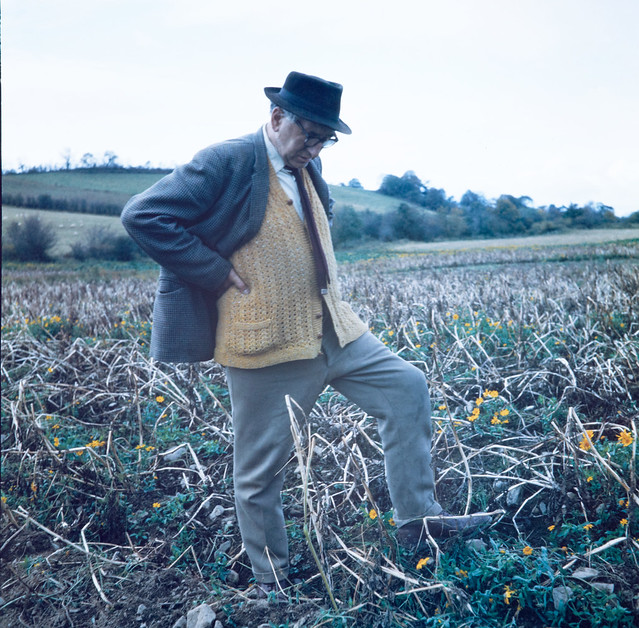 Patrick Kavanagh was, in my view, Ireland’s greatest poet. And probably its most cantankerous!  In a pub one day one woman acquaintance  hinted he should buy her a drink. ‘Can’t you see I have a mouth on me’, she said. ‘How could I miss it’, he replied, ‘and swinging between your ears like a skipping rope’. Another time a American academic asked him, ‘Have you ever tried the Alexandrine hexameter with the internal rhyming scheme?’    ‘No’, he replied, ‘but I once nailed a pigs liver to the haggard door and I shagged it!’               His greatest enemy was Brendan Behan, who detested culchies, and who often described him as ‘the fucker from mucker’, and said that the greatest thing he ever wrote was a cheque that didn’t bounce.  While Patrick maintained that the only journey Behan ever made was from being a national phoney to being an international one!

II
Maguiire was faithful to death:
He stayed with his mother till she died
At the age of ninety-one.
She stayed too long,
Wife and mother in one.
When she died
The knuckle-bones were cutting the skin of her son’s backside
And he was sixty-five.
O he loved his mother
Above all others.
O he loved his ploughs
And he loved his  cows
And his happiest dream
Was to clean his arse
With perennial grass
On the bank of some summer stream;
To smoke his pipe
In a sheltered gripe
In the middle of July.
His face in a mist
And two stones in his fist
And an impotent worm on his thigh.
But his passion became a plague
For he grew feeble bringing the vague
Women of his mind to lust nearness,
Once a week at least flesh must make an appearance.
So Maguire got tired
Of the no-target gun fired
And returned to his headland of carrots and cabbage
To the fields once again
Where eunuchs can be men
And life is more lousy than savage.