My report on Sunday’s reading of Gilmartin at Pentameters: 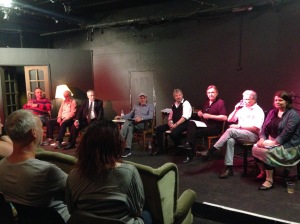 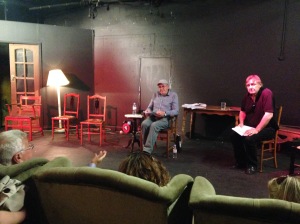 The first thing to say is that there were quite a few surprises. The first was that we nearly had a full house for the occasion! It’s usually unheard of to get more than a handful to come to readings. The second was that the cast got a standing ovation at the end. The third was that a life-long friend of Gilmartin’s fetched up from Luton, and was so moved by the occasion that he almost broke down in tears at the q/a session afterwards. He did manage to issue an invitation to us to repeat the exercise in Luton, where he said we would have no problem getting a couple of hundred to come.  But the biggest surprise of all was that Tom’s  son and daughter turned up. They were very complimentary about the whole thing, particularly Tom Jr, who felt that we had got the essence of the story, and more importantly, the essence of his father. Phew…thank God for that!
As for the play itself, I thought it worked very well as a piece of theatre – much better than I expected. I wasn’t sure if the audience would get the story, being quite mixed, and story being so Irish, but they got it in spades! It seems to be a universal tale; corruption at high level, and contemptible treatment of the ordinary man/woman. The script still needs a little tweaking here and there, but not much, and I did get some useful insights to the man from Tom Jr – which I can add to the mix.
Where do we got from here? Not sure yet; we may go for a run at Pentameters later in the year or early next year, and we may well take up the invitation to do the gig in Luton, but there were also serious suggestions that we should do it in Dublin. The topic is still very hot in Ireland; and all the main protagonists are still walking around free as birds over there. They should be prosecuted but I don’t think the relevant authorities have any appetite for doing it. Apparently Bertie Ahern was on Irish radio yesterday being questioned about the bank scandal so none of it has gone away.
I think it could be a ‘big’ play if we could get the right backing, and my feeling is that a tour of Ireland, starting in Dublin, could be the way to go. It’s early days yet, so I think we will await developments for now.