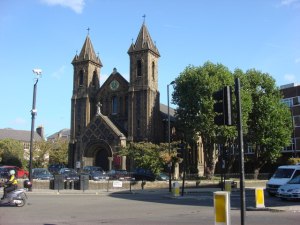 I KNEW KENSAL GREEN BEFORE ITS RISE
I knew Kensal Rise, or is that Kensal Green
When upward mobile and genteel
Were hardly to be seen
When Harlesden was such a pain
And we all avoided poor Scrubs Lane.

Queen Victoria and Mark Twain
To Kensal Rise they both came
And a library they did endow
That’s the talk of London now
Today there’s cafes, bars, boutiques
And Chamberlayne’s the hippest street
Where Lily Allen and Sophie Dahl
Rub shoulders with the great and small
And Ian Wright and Zadie Smith
Have made the area quite a hit.
I wonder if they all will stay
Like Harold Pinter to decay
With William Makepeace Thackeray