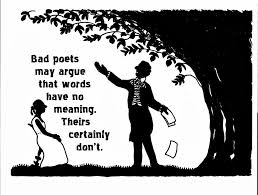 And it was all right

But it was a prelude

Amis clearly wasn’t a fan of Wordsworth! Is writing bad poetry easier than writing good poetry? Probably not – and it’s just as time-consuming. William McGonagall could probably confirm that!

William Topaz McGonagall  was a Scottish weaver, poet and actor. He won notoriety as an extremely bad poet who seemingly couldn’t care less of his peers’ opinions of his work.

He wrote about 200 poems, including his notorious “The Tay Bridge Disaster”, which are widely regarded as some of the worst in English literature. Groups throughout Scotland engaged him to make recitations from his work and contemporary descriptions of these performances indicate that many listeners were appreciating McGonagall’s skill as a comic music hall character. Collections of his verse remain popular, with several volumes available today.

McGonagall has been acclaimed as the worst poet in British history. The chief criticisms are that he is deaf to poetic metaphor and unable to scan correctly. In the hands of lesser artists, this might generate dull, uninspiring verse. McGonagall’s fame stems from the humorous effects these shortcomings generate. The inappropriate rhythms, weak vocabulary and imagery combine to make his work amongst the most unintentionally amusing poetry in the English language. His work is in a long tradition of narrative ballads and verse written and published about great events and tragedies, and widely circulated among the local population as handbills. In an age before radio and television, their voice was one way of communicating important news to an avid public.

He died penniless in 1902 and was buried in an unmarked grave in Greyfriars Kirkyard in Edinburgh.

Beautiful Railway Bridge of the Silv’ry Tay!/ Alas! I am very sorry to say /That ninety lives have been taken away/ On the last Sabbath day/ of 1879/, Which will be remember’d for a very long time/.’Twas about seven o’clock at night,/And the wind it blew with all its might,/ And the rain came pouring down/, And the dark clouds seem’d to frown/, And the Demon of the air seem’d to say-“/I’ll blow down the Bridge of Tay /-