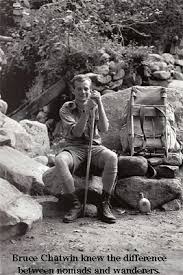 Bruce Chatwin was a bisexual who died of Aids in 1989, aged only 48. Bruce was one of the finest travel writers of the 20th C, and books like In Patagonia and The Songlines influenced me just as much as the works of Hemingway, Behan, Greene and O’Casey did as a fledgling writer.

He loved exotic destinations and always wanted to go to Patagonia; in 1974 he flew Lima, Peru, for the Sunday Times Magazine, and decided to go further. ‘Have gone to Patagonia’ he said in a telegram to the Times, and for the next 6 months travelled around the region, listening and writing, which resulted in the book ‘In Patagonia’ a couple of years later. Part travelogue, part story-telling, it dramatises in graphic detail the regions of Patgonia, and Tierra Del Fuego – which is sometimes called Land of Fire.

In The Songlines, he follows the trail of the Australian aboriginal people – the native Koori –  and learns about the Aboriginal idea of Songlines, the tracks of music the Aboriginal Ancestors left as they walked from place to place singing creation into existence, naming things and attaching stories to their sacred places. Each Aboriginal is associated with an animal, or totemic family, who sang his Songline, and considers that association as even more sacred than the one he has with his blood family.

Both books are a blend of fact and fiction, and revolutioned the art of travel writing.

2 thoughts on “BRUCE CHATWIN WAS HERE”