The time is near

The clock is queer

I have had more than one beer.

In the early morning.

The keys are close to the time.

They open the locked cabinet beneath it.

The shotgun is quickly loaded

Two in the chambers just in case

Then the gun is heeled to the wall

And his forehead firmly anchors it.

Papa is no more.

Hemingway published around 20 poems in his lifetime – which is about 19 more than I expected!

Never trust a white man,
Never kill a Jew,
Never sign a contract,
Never rent a pew.
Don’t enlist in armies;
Nor marry many wives;
Never write for magazines;
Never scratch your hives.
Always put paper on the seat,
Don’t believe in wars,
Keep yourself both clean and neat,
Never marry whores.
Never pay a blackmailer,
Never go to law,
Never trust a publisher,
Or you’ll sleep on straw.
All your friends will leave you
All your friends will die
So lead a clean and wholesome life
And join them in the sky.

You know I always thought

He had a Romanian head on him

Well, It had that bloated look to it,

Hemingway had it in spades..

He could never pass a bar,could he?

Or it might be that time he landed on his head

In those two helicopter crashes he had

One after the other, the same day I think.

Exposed his innards to those African parasites

Who knows what damage they did,

Rampaging around his grey matter.

He never said much about it afterwards

Though that twinkle in his eye

GOING ROUND THE SUN AGAIN

Even if you are merely a passenger.

The first time round was really a blur

No sense at all that we were

Mother said I screeched most of the way

And that the snow piled high

For months every day.

Even the tenth spin;

I don’t recall a lot of that

Except that it was the year mother got fat

For a while, anyway

And then she was thin again.

The years stretched to decades

Still round and round we went

Sometimes I travelled in the company of steel bars

And sometimes I journeyed with the stars.

And there were times when writers came to say

Of course the children came too.

But for many years I have tripped with you.

My father got to number sixty nine;

I wonder how many rounds will be mine?

taken from my poetry collection ’67 PLUS’

THE BEAR NECESSITIES
‘What kind of animal are you then?’, she asked me.
‘Well’, I replied
‘I do not growl like a bear, I roar like a lion’.
‘Ah, one of them, are you?’
‘No actually, I’m more of a bear to be honest’.
‘Oh, they’re fearsome creatures, they are’.
‘Not really’, I said ‘once you get to know them.
For instance, take me
The other day, whilst in my bear mode –
Brown bear, I might add –
I took a notion to frighten some motorists.
I spotted a likely candidate and stepped from
Behind my tree hiding-place
And plonked myself in the middle of the road.
Then a motorist stopped and began berating me’,
You’re an ugly brown bear, you should be ashamed;
Trying to frighten people
Get out of my way. Don’t you know who I am?
I didn’t, but he told me anyway.
I am Ernest Hemingway.

When Ernest Hemingway blew his brains out with his shotgun in his kitchen on the morning of July 2nd 1961, he wasn’t the first in the Hemingway family, nor would he be the last.
His father, Dr Clarence Hemingway, took the same way out in 1928, though he used a revolver and not a shotgun.
His sister, Ursula, who was suffering from cancer, took a drug overdose and died on 30th Oct 1966
Leicester Hemingway, Ernest’s younger brother shot himself with a .22 pistol in September 1982
Actress/model Margot Hemingway, Ernest’s grand-daughter, died of a drug overdose on 1st July 1996

Gregory Hemingway – sometimes known as Gloria Hemingway – and Ernest’s third son, died under mysterious circumstances whilst in police custody on 1st Oct 2001.
Gregory said of his father’s death; ‘I am glad my father is dead because now I can’t disappoint him any more’. Gregory, who was a practising doctor struggled with the cross of his father’s fame all his life. He also had problems with his own sexuality; he was a transsexual, sometimes living as Gloria Hemingway. Despite this, he married 4 times, including his father’s assistant, Valerie Danby-Smith. They had three children together before they finally split up in 1989. 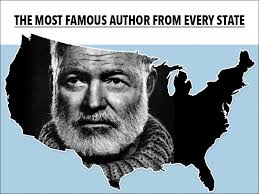 What inspires you to get out of bed each day?
Today just might be the day the postman doesn’t ring twice! In other words, no rejections today. (THE POSTMAN ALWAYS RINGS TWICE was Jame’s Cain’s best seller and its title was inspired by the fact that his postman always rang twice if he was delivering a rejected manuscript!)
When you’re not writing, how do you spend your time?
Reading mostly. To be a good writer you have to be an even better reader. Other writers fascinate me; how they put a book or play together;what it is about their work that makes it great; what I can learn from them. I am often in awe of how good some writers are.
How do you discover the ebooks you read?
I am an avid reader of reviews, be they in newspapers or online. They don’t necessarily have to be good reviews, just interesting. With certain writers I don’t even bother with the reviews; when a new book comes out I just know I will like it.
Do you remember the first story you ever wrote?
Yes, I do. It was a story about a security guard planning a robbery at a holiday camp ( I worked as a security guard at Pontin’s holiday Camp in Bracklesham Bay in Sussex at the time) and it was terrible. Complete rubbish! Needless to say it never saw the light of day.