Fuck you
Said the Emu
Though of course
I couldn’t be sure
It was an Emu at all,
Never having seen a live one before;
Well, not crossing the road
Ahead of me anyway;
Part of a group
That resembled a hen party;
(or should that be Emu party?)
A troop of tarty Emus with cropped hair,
Johnny Rotten aficionados’, perhaps?
Teetering across the never-ending road
In the Australian outback;
Chaperoned by a wedge-tailed eagle…
Chaperoned?
Who looked just as likely
To sink its teeth
Into their browning flesh
As guide them safely to the other side.
Perhaps it was the eagle
Who said ‘fuck you’?
In the fading light
I couldn’t be certain
Of anything.

Stephen Edgar has always been a favourite poet of mine. Born in Sydney in 1951 he spent a number of years in London, forming a friendship with fellow Australian poet Clive James, before returning home. This is a fine poem, as is Man In The Moon.

How can she do this now that it’s all changed,
Present her lips to kiss
As though that known face were the same as this
From which you’ve been estranged?
Of course it is. Here, now? Or then and there?
How can she sit down in her cloud of hair

And watch you as though you were someone else?
You are, of course, to her.
You were this rendezvous’s commissioner
And nobody compels
Your self-distressed attendance here but you.
So watch her do as only she can do.

She lifts her left hand to her left earlobe
And tugs the earring, slides
The hook half out and rubs at it and glides
It in, as its purple globe
Swings back and forth to tantalize your sight.
Soon she will do the same thing with the right.

A silver bracelet rides along one arm
Or settles at the wrist,
And lest adornment should seem prejudiced
The other has its charm
As well, made somehow perfect by the dent
That mars the curve of its encirclement.

And those two combs holding her hair in place,
Two combs of tortoiseshell—
And when she took them out, oh how it fell
At night around her face,
Which she would lift to you and shut her eyes,
That beauty come to seem beauty’s disguise,

And whether by desire or candlelight,
Her skin took on a glow,
An alabaster lucency, and so
She leant back to invite
Your open-mouthed assent. And you would hold
That pose like two Klimt lovers cloaked in gold.

And that first night you slid the purple shift
Over her shoulders and
Peeled gently downwards, leaving her to stand
In Aphrodite’s gift,
And sinking with her garment to the floor,
Made moist the shadowed fold you knelt before.

How can she do this now that you’re estranged,
Stand in her cloud of hair
As though she were the same, though well aware
That everything is changed
(Of course she is), presenting for your kiss
The mouth that was the mouth that is not this.

Singing out the names of every

Singing you and me

Singing all the world

A path across the land

Or sometimes the sky

Through the parched interior

Passing over the land

Rhythmically beating out the jives

Where the spirits of unborn children

Sing to keep the land alive

Chatwin tells us how it was

The songlines stretching across the eons

People singing their lives into existence

Had tuned to perfection.

Their roads invisible to us

No marks we could discern

No bulldozer dented this terrain

No tarmac spread for others gain

No buildings stacked with pure disdain

To leave wrecked nature in their wake

The lines were left to all for free

If our blinkered eyes could only see. 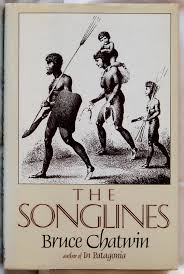